Tootie from Fairly Oddparents: Fairly Oddparents is a show that’s about Timmy Turner, a boy who gets unlimited wishes from his fairy godparents Cosmo and Wanda. Timmy was granted fairy godparents because he was being tortured by his evil babysitter, Vicki. Tootie is Vicki’s younger sister who has an enormous crush on Timmy. Tootie, who wears braces, is a little crazy and drives Timmy nuts throughout the show. But, Tootie has a very good heart and always defends Timmy when she has a chance. 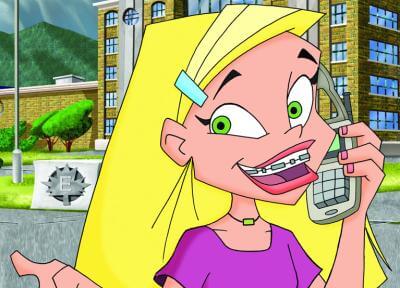 Sharon Spitz: Sharon Spitz is the main character on Braceface. She has beautiful blond hair and green eyes. Sharon is a typical teen girl who deals with normal teen things like puberty, liking boys and friendship troubles. Sometimes, she messes up along the way, but, like any other teenage girl, she always learns a lesson from her mistakes. And, with help from her friends, she learns that standing up for yourself is very important. 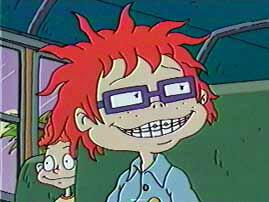 Chuckie Finster: Chuckie Finster used to be the cute red-haired baby on Rugrats, but he grew up and is now on the show All Grown Up. Chuckie has wild red hair that’s kinky, purple glasses and braces. He is Tommy’s best friend and a well-known scaredy-cat. He has a stepsister called Kimmie who is a lot braver than he is. In the show All Grown Up, Chuckie is portrayed as an uptight dork who is way too protective of his sister and tries to prove his bravery to others. But he always stands up for his friends when it’s needed. 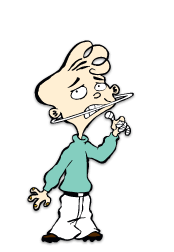 Jimmy: Sweet and insecure, Jimmy is the little boy who wears a large retainer on the TV show Ed, Edd and Eddy after one of the characters accidently hits him in the face with a bowling pin. He is a little clumsy and innocent, but his headstrong friend, Sarah, is always there to protect him from bullies. Jimmy is usually a target of one of Ed, Eddy and Eddy’s schemes. Sometimes, though, Jimmy can create complex schemes that end up working even if he’s the weakest kid in the cul-de-sac. Secretly, Jimmy has an enormous crush on Sarah, but he keeps his feelings to himself.

Also check out these real life celebrities with crooked teeth. Some celebs, like the cartoons, used braces to correct their smiles, but some like Katherine Heigl decided Invisalign was a better fit for her.