Dr. Sebastian Rodriguez received his DDS degree in 2005 after which he practiced general dentistry before pursuing postgraduate school. He did his specialty training at the University of Puerto Rico, where he completed a Certificate in Orthodontics and MSc in Dental Sciences. For being the highest ranked orthodontic Resident of his class; Dr.Rodriguez was granted with the Jaime De Jesus Abreu Award. He was also nominated for the Charley Schultz Resident Scholar Award granted yearly by the American Association of Orthodontics (AAO) to orthodontic residents for their research work. He is a Diplomate of the American Board of Orthodontics (ABO) and has been practicing orthodontics for over 4 years. 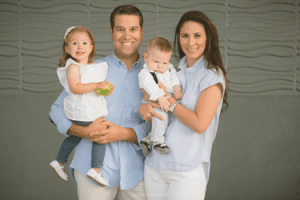 Dr. Rodriguez is fluent in English and Spanish. He has been featured in Univision’s television morning show Despierta El Paso. Dr. Rodriguez and his wife Silvia have two beautiful children, Victoria and Sebastian. They love to travel, especially back to their home country Venezuela to enjoy the great beaches and to visit their families.